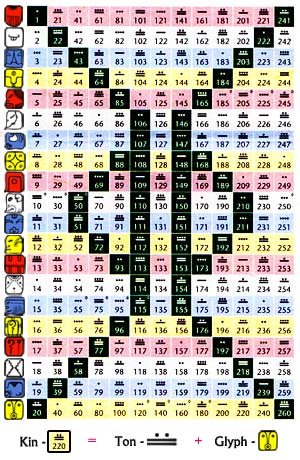 The Mayans recorded the stars’ motion in over seventeen calendars, where precise tracking of the celestial bodies, served them to learn the full energy potential of any given moment.

Just as in modern astrology, where we learn the values of the stars layout that influence us through signs and houses, the Mayans have left us a multi-dimensional astrology, which refers to time via geometric symbols.

In these unique times in which we are living, the importance of the meaning of time has augmented. The ancient Mayans have left us with a vast and profound knowledge with regards to their perception of time that allows a comprehensive observation of every moment of our lives. The most Important of the Mayan calendars is the Tzolkin, which is a mathematical table that describes the development of mankind in all its stages and transitions. This table remains etched on the walls of the temples of the Mayan pyramids – one of the important items to have survived the Spanish conquest. The calendar contains hidden codes that allow the human society to connect to the memory of time as the Mayans perceived it.

The Tzolkin calendar is comprised of combinations of geometric symbols that show energies of different layers in the universe. Unlike the Gregorian calendar, which follows the sun’s moves, or the Hebrew calendar that follows the moon’s, it combines the most of everything that influences us and attunes us to the natural rhythms of the body.

The calendar is a geometric model of movement in time, and delving deeper into the codes that are in it reveals meaning to life itself. This model presents a cyclical and spiral concept of time; this, in contrast to the linear past-present- future time perception that characterizes the Western-modern world. An in-depth study of the Tzolkin calendar expands our perception of time and with it the ability to flow over time.

The Tzolkin calendar shows the five- dimensional Pleiades’ cycle that describes the path of our sun around Alcyone (the Central Sun) in a cycle that lasts 26,000 years. The genius of the Tzolkin lies in its length – 26,000 years, because this is the time needed for a critical jump in human evolution. Astronomically, we move to a point where our sun will be completely within the Photon Band.

In the Northern Hemisphere’s winter of 2012, the sun will be at the point of intersection between the Earth's ecliptic – the track the Sun as seen from Earth – and the equator of the Milky Way Strip. Earth Enters the Aquarian Age once every 26,000 years, when each large Mayan cycle completes and begins anew. 21/12/2012 is the date on which the cycle completes and many calendars meet.

Basic concepts in the Tzolkin calendar:

The Mayan sacred calendar is a mathematical table that is comprised of combinations of numbers. The formulas and codes for transitions between dimensions lie in the numbers themselves. In my opinion, this calendar has the formula that will allow us to break through the linear thinking of time. Just as quantum physics talks about the existence of parallel dimensions so does this calendar present us with a spiral movement of 13 parallel dimensions.

The main frequency in the Tzolkin calendar is 20:13. The numbers 13 and 20 and their different combinations and expressions are significant in the Mayan culture. The Tzolkin calendar contains 20 symbols and 13 tones. The length of the "week" of the Mayans is 13 days and is called "wave."

According to the Maya, in 2013 (20:13) humanity passes to the fifth dimension, which is the timeless dimension. Many of the Mayan calendars that refer to routes of many stars and planets, meet at a certain moment, and in 2013 a jump occurs in time. The symbols and “waves” of the Mayan calendar can help us absorb and understand the meaning and experience of timelessness. 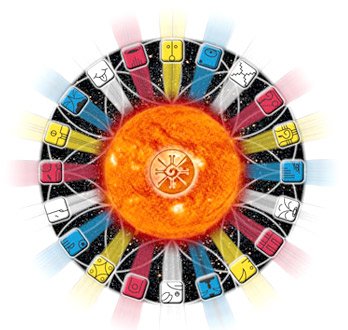 The 20 symbols are geometric shapes that teach the whole knowledge. Each icon can be described in infinite words, while the wisdom and practical information transmitted in any form is huge. The symbols were carved in the stone temples of the Maya and are intended to expand our knowledge of ourselves and our perception of time. As we breathe, draw and watch symbols, the brain structure changes and allows a connection to our soul and the presence of joy in the moment. A visual connection to one of the symbols can cause drastic changes in our lives.

The knowledge presented in the Mayan symbols, is parallel to the knowledge in the Hebrew forms (letters), the hexagrams in the Chinese Book of Changes, the Runic Vikings and more. The geometric shapes tell us in the primordial language of the creation about the divine plan that already exists; and allow us to recall what at some level we already know. The geometric shapes of the symbols speak directly to the body cells of each of us and our relationship with them is direct. Each icon contains codes of information that allow healing and growth. 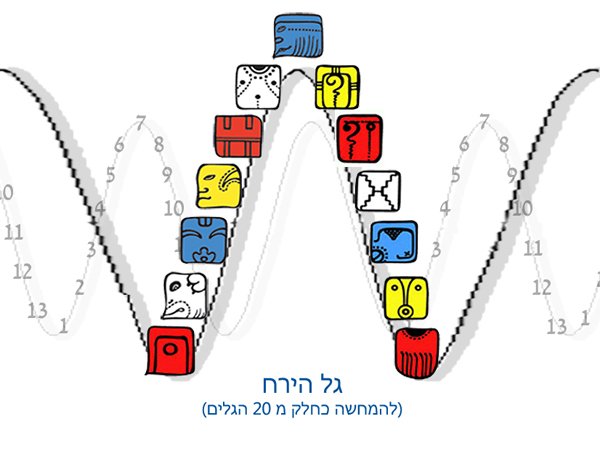 The tones are rhythm, sound, shape, color, a certain energy that resonates and changes day by day. Each day and each person have their own rhythm, which gradually develops in the 13 days (tones) process, referred to as "wave". The wave describes the movement in time, when in effect we pass from one wave to the other in an endless spiral motion.

Tones represent also the 13 major joints in the human body, so that in fact the Tzolkin table is in our bodies and we simply recall the encoded knowledge that is within us. The joints of our body represent our ability to move in this world. When we are synchronized through the joints with the symbol of the day, we load our system with superior information and with the ability to transform it into actions in our daily life.

In this diary, the Tzolkin symbols are added to the Gregorian and Hebrew dates, so you can track daily the various waves. Further ahead, the meaning of all the symbols and tones will be detailed. If you assign a little attention to the waves and symbols daily, you will be inspired by the Mayan wisdom and be able to develop. The more mentally, visually and experientially aware to the change of energy, the easier the connection to the waves and the more flowing of motion in life.

The combination of a glyph and a tone creates a Kin, which is another fundamental concept.

This refers to a day as well as to a person. Kin is the smallest unit that represents the cosmos, the Earth and the composition of materials and the energies within it.